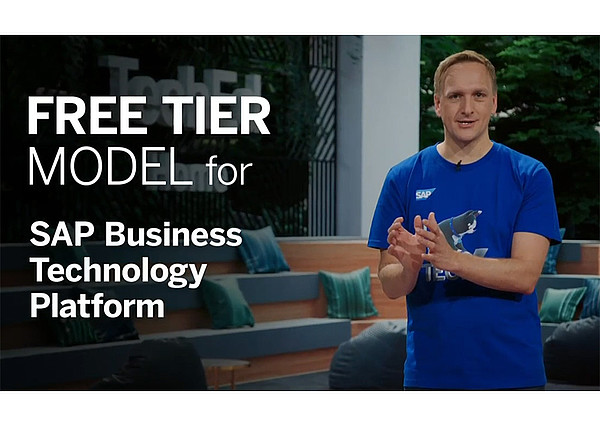 SAP TechEd this year was once again held entirely online. This did not prevent the organizers from presenting end-user companies with a wide range of exciting, relevant topics with lots of promise for the future. Another plus point was that the SAP SE experts were often looking beyond the technology to the wider contexts.

Our overall impression: SAP SE is shifting to a stronger focus on understanding the concrete use cases for its technology. At TechEd, this meant an emphasis on listening to customer and partner voices during the sessions. The Walldorf-based software vendor is currently focusing resources on stabilizing and standardizing its Business Technology Platform (BTP). This creates essential breathing room for customers and partners to review and engage with the new trends that have emerged over the last few years. Two in particular were highlighted at TechEd as deserving a bigger role in customer projects: the low-code/no-code trend and the “free tier” licensing model for the BTP.

Software development has become much more complex over the last twenty years. Developing applications in a monolithic architecture hosted on a single server was never a simple task in any case. However, the transition to building applications from microservices, packaged into containers and hosted in a distributed cloud environment, has made software development more complex by an order of magnitude.

At the same time, businesses are facing the challenge of trying to implement and digitalize processes against a background of constant change. The software just can’t keep up with the ever-faster pace. For example, during the pandemic we’ve seen the demand for particular products skyrocket, and customers rush to put new processes in place – only for the product to become obsolete three months later (think of the hygiene sector). “By the time the IT catches up, the business has long gone,” commented one customer.

Department experts develop their own applications

The issue is exacerbated by the growing skills shortage faced by the IT sector. When there simply aren’t enough highly skilled developers to meet rising demand, it’s no wonder that low-code/no-code (LCNC) development is gaining footholds everywhere. The approach allows professional developers to vastly increase their productivity – but even more importantly, it opens up the world of software development to non-developers, or “citizen developers” as these tech-savvy users are being dubbed. Experts in the company’s various departments use LCNC tools to build their own simple apps or automate processes.

These experts understand the challenges and workflows in their own field. Using LCNC tools, they can develop their own applications within a basic framework, without needing to call in resources from the company’s IT team.

SAP started to engage with this trend quite some time ago. At TechEd, the company announced that it is now bringing together its LCNC tools in a “Unified Low-code/No-code Platform”. For those interested in no-code application development, SAP offers the bought-in tool AppGyver, now integrated directly into the BTP. For low-code, users can explore what’s offered in the Business Application Studio, which has been updated with new possibilities, and Fiori Elements.

Last but not least, over in the process automation field, RPA, Workflow and Business Rules have been bundled together into “SAP Process Automation”. This creates a new, standardized and simplified design environment, while not affecting runtimes in any way.

Free tier: the Business Technology Platform for everyone – and everything!

Low-code/no-code brings down the barriers to application development. It will come as no surprise to learn that the tools mentioned here, just like all SAP tools and platforms for development, integration, data management and analytics, have been incorporated into the Business Technology Platform(BTP). T.CON has already made extensive use of the BTP for years, for developing our cloud applications.

We also use the platform heavily in our customer projects. For example, a customer portal that has just gone live for paper manufacturer Koehler was built using the BTP.

At the same time, we have found that many of our customers are hesitant about implementing projects in the BTP. One reason for this hesitancy is that the on-premises platforms they have already invested in are doing their job just fine. Another is that people are justifiably wary of experimenting with important core functionality. However, this fear of taking the plunge means missing out on many of the advantages of development in the BTP, such as more efficient release cycles or the ability to integrate new features.

There is a third, no less important, reason that many customers have not taken the step towards BTP, and SAP SE addressed this at TechEd 2021: the license model. There used not to be an easy way for potential users to try out individual services and experiment with the possibilities without first making considerable investments and getting tied into extended contracts.

SAP SE removed this barrier in mid 2021. The vendor introduced a usage-based “Pay-as-you-go” (PAYG) model. Of particular interest is the “free tier” option included in this new model. Customers on the free tier can use certain services completely free of charge, up to a specified usage volume. It’s the perfect model for developing prototypes that can later be seamlessly transferred to productive operations.

At TechEd, this free tier was also opened up to individual developers. This means anyone can now set up a BTP account and use the included services free of charge. The difference between the free tier and the free trials SAP has offered for years is that the free tier environment corresponds 1:1 to a normal production environment and will not reset after a given period of time.

SAP SE also announced that the HANA cloud and the Integration Suite have now been included in the free tier. The latter in particular will be interesting for many developers and end-user companies, since the suite has versatile options for a huge range of integration scenarios.

There is no longer any reason not to be making the most of the myriad possibilities of the Business Technology Platform (BTP). There’s no reason not to be using Process Automation instead of Batch Input to build workflows, no reason not to be automating transactions with RPA, and no reason not to reach for AppGyver or the Mobile Development Kit (MDK) to build simple mobile applications. Likewise, the Integration Suite can often be a better starting point than a manual interface or on-premises platform for companies who want to develop sustainable, fit-for-future solutions.

SAP is preparing for its fiftieth anniversary in 2022, and it’s already clear what the defining themes of the jubilee year will be: the cloud and the Business Technology Platform. These two trends are about new opportunities and new prospects for bringing the digital transformation to the business world and equipping it for the future. They’re exciting for us at T.CON as an SAP Gold Partner, and even more so for the end-user companies.

… why not check out the full slate of news and announcements in the SAP TechEd News Guide?